In 1996 Tanishka got down on her knees & asked the Universe to send her some female role models. Within 2 weeks she was invited to a Goddess workshop with Jennifer Powell which inspired her to leave her fledgeling career as a stand-up comedienne (putting herself down for laughs!) & spend a year in the mountains studying ancient women’s wisdom, after which she returned to pioneer a unique series of ‘Awaken Goddess’ feminine archetype seminars & channelled readings.

Her first book, ‘The Inner Goddess Makeover’ was released June 2007.

In 2008, she started also working with men as well as women offering private Sacred Union sessions for individuals, couples & workshops for men & women to trial the Sacred Union teachings she was channelling in her book, Creating Sacred Union Within.

In 2010, following guidance she created a You Tube series of videos to educate women about the ancient custom of the Red Tent, titled, ‘Operation Red Tent’ this also included a fact sheet with basic instructions on how to create a circle. She later expanded this vision in 2013 by launching an online course which gave women a far more comprehensive training in group facilitation, lunar cycles, working with the shadow, sacred space & women’s mysteries. This course has now trained women in 43 countries.

In 2011 one of her students, Natasha Odnoral was intuitively guided to offer her the Facebook page, ‘The Moon Woman’ she had created which had 7000 followers. Tanishka’s daily lunar guidance blog became an instant hit & the numbers have soared to over half a million followers.

In 2012 she released her second book, ‘Creating Sacred Union Within’ & did her first national speaking tour around Australia to public & critical acclaim, decoding of the Holy Grail from the perspective of the sacred feminine. In 2014 she did her first international speaking tour in the US & ran her first international‘Inner Goddess’ retreat in Bali which has been a sell out annual event ever since.

In 2014 she launched her Sacred Union online course, guiding singles & couples through the ancient practice of the Hieros Gamos which she decoded. She also launched her first two oracle decks based on work as an intuitive Tarot reader for 12 years as well as 3 x double meditation CD’s & her third book, ‘Creating Sacred Union in Partnerships’.

In 2015 she launched her fourth book, ‘The 28 Day Happy Challenge’ in the US to raise funds for the rehabilitation of women & children affected by human trafficking.

In 2019 she did her first European tour with Franz Hutter facilitating healing ceremonies and Sacred Union workshops for men and women.

Tanishka has been a popular keynote speaker at conferences & events worldwide & her articles have been published in various national magazines. Her work is distinguished by her gift for channelling ancient wisdom & making it relevant & accessible with her down-to-earth humour. 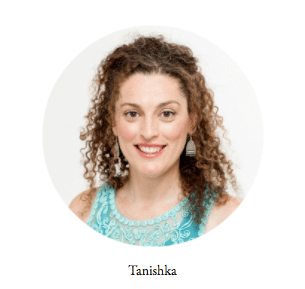