Gift yourself The Ultimate Red Tent Experience ~ with 7 Days of Lush Sisterhood in Ibiza.  Created and personally facilitated by Taniskha, The Moon Woman loved by over half a million followers of her daily guidance, best selling author of ‘The Inner Goddess Makeover’ and ‘Goddess Wisdom’ published by Hay House. Don’t miss your chance to be part of this intimate LIVE event!

Included In Your 7 Day Red Tent

YOGA FOR A WOMAN’S CYCLE

NUTRITION FOR A WOMAN’S CYCLE

INITIATION TO THE MAGDALENE MYSTERIES

“Through your Red Tent Immersion you will gain an embodiment of your sacred power as a woman. You will undergo a soul nourishing experience of authentic sisterhood and upliftment. Practical strategies will be imparted to give you lifelong skills to caretake your needs on a cyclical basis. Healing perspectives on how you see and honour yourself as a woman will be shared, as well as instructions to activate your innate mystical gifts. You will be fully supported to integrate all the aspects within your psyche that are calling for healing.” Techniques for life will be passed on to help support your reproductive health, menstrual cycle flow, increase your radiance and inner glow, and support your bodies’ well-being and fertility.

Imparting breast massage techniques to support the detox process, open the heart chakra and powerfully activate your inner glow and magnetic outer radiance as a woman. This sacred cleansing ritual of Ratu Yoni Smoking, including aromatic herbs and spices, will powerfully shift your energy, leaving you feeling as if you’ve been born anew! “Your exclusive retreat also includes a PRIVATE group session at a traditional Turkish Hammam to unwind and enjoy the therapeutic benefits of this powerful and ancient purification ritual.” 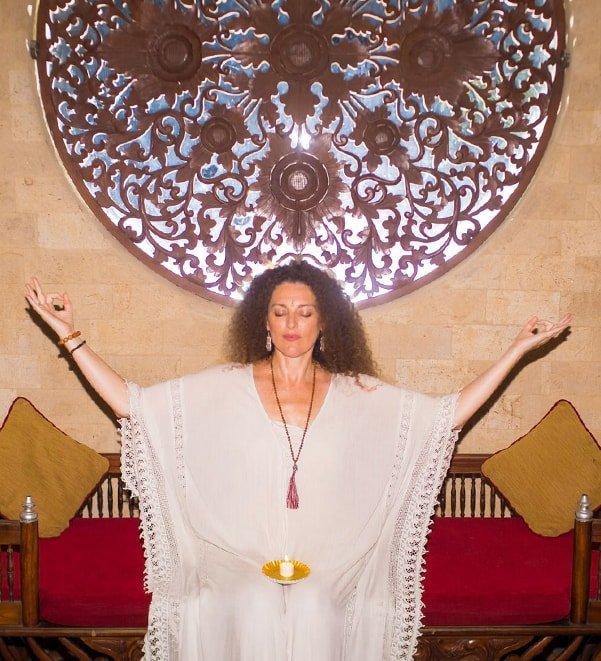 She has continued her service to women for the past 22 years offering priestess initiation courses, workshops, retreats and sacred ceremonies in alignment with the lunar and seasonal cycles.

In 2006 Tanishka began training Red Tent facilitators. In 2010 she recorded an educational Red Tent YouTube series, and in 2013 she created the first Red Tent online facilitator training course which has now trained women in 44 countries. This initiative is an integral part of her vision to create widespread social change through seeding a network of support for women of all ages during the lunar phase when they are most at risk of self-defeating behaviours, conflict and burn out.

In addition to her books, she has created meditation CD’s & oracle decks and won acclaim from audiences around the world with her groundbreaking decoding of the ultimate Magdalene Mystery teaching, the Holy Grail. A popular feature writer for numerous magazines and keynote speaker at festivals around the world she is now based in Bali. WE BEGIN our program with a welcome circle and orientation, followed by dinner and sound healing.

RETREAT CENTRE Ibiza airport is a 30 minute drive to the retreat centre. The nearest airport is Ibiza International airport, however it’s likely you may take a connecting flight via one of the major London airports.

AIM TO ARRIVE EARLY We encourage you to arrive the night before. For local accommodation options check out Airbnb or visit: Booking.com

ONCE YOU’VE BOOKED YOUR FLIGHTS please email us to confirm.

WE COMPLETE our retreat program at 10am so allow ample time for travel to the airport & international check-in.

Please fill in your event details below and we’ll be in touch!

“We will celebrate our mystical soul sisterhood journey with a fiesta, complete with delicious, traditional Spanish cuisine, beautiful henna adornments and sangria!”